(All prices include GST)

The SLOT ME IN™ “AUSSIE KINDLING KRACKER™” also known as the “AUSSIE KINDLING SPLITTER™” and “AUSSIE KINDLING CRACKER™” (because that’s what is does)  splits or cracks kindling as to speak  is a unique and original shaped, designed  and engineered handy steel tool to help you split your kindling with ease and safety. It’s the safest and easiest way to split kindling for your fire, whether it’s for your home fireplace, camping fire pit or for commercial use in wood fired pizza ovens to name a few. Our unique and original twin hexagonal top and bottom rings firstly locate the kindling timber or wood vertically over the inverted “wedge” axe shaped blade with the bottom ring having a larger footprint to securely stand upright on either the ground or a raised platform such as a stump or log offcut for ergonomics of use. The base hexagonal ring has 4 holes to either be screwed down to a raised stump or log offcut as mentioned (using the 4 heavy gauge timber screws supplied) or be used on say lawns or soil and be pegged down using 4 tent pegs to secure it (not included).

Instead of conventionally using a small sharp axe or wood splitter striking with a downwards force onto your kindling to split it (one of the most common ways to spit kindling)  often running the risk of an injury with the axe striking your hand that’s holding the kindling in place, the process is reversed  whereby the inverted “wedge” axe blade is upwards facing and fixed in place inside between the top and bottom rings supported by the two vertical posts, rather like a lot of mechanical powered wood splitters, whereby a flat faced ram arm (the hammer) pushes the wood forcing it onto a fixed “wedge” axe blade and spits the wood with the force exerted. With the hand force of a blunt tool, namely a 1.3kg mash/club dual faced hammer or similar the kindling can be split with a simple strike of the hammer on the top flat end of the kindling forcing it to be “wedged” and split over the inverted blade. A simple tap will secure the kindling on the start of the blade then you can remove your hand and allow the kindling to stand unsupported then strike it with the hammer and hey presto kindling without the risk of a hand injury. Of course, for the proficient operator and with a little practice you can spit your kindling in one motion too holding it below the top and striking the top with the hammer releasing your hand at the time of impact with the top of the kindling. The heavy-duty blade has 10 unique shaped and spaced fins or “wedges” (5 on each side) that continue the wedging effect making light work of splitting your kindling as they force it to wedge outwards as the kindling passes over them and split it in much the same principle as a handheld wood splitter does though with ease and safety.

Another handy feature on the Aussie Kindling Kracker™ by Slot Me In™ is our original and innovative bottle opener (stubby opener), after all its an Aussie invention, conveniently positioned on the outer top hexagonal ring. It comes in handy for popping the top of your desired beverage (bottle capped drink) after working up a thirst when splitting your kindling. It’s also handy as a cutting edge for twine when tying a bunch of kindling together too.

You maybe also be interested in our AUSSIE KINDLING KRACKER KOMBO KIT™ or AKKKK™ as we call it for short here at Slot Me In™. This kit includes of course the original Aussie Kindling Kracker™ combined with a superbly crafted 1.3kg club/mash dual faced hammer (with a cast steel drop forged dual head and select hardwood ergonomic handle), a pair of leather safety gloves and 4 x 12-gauge hex drive 50mm wood screws all-inclusive for $329.00 plus shipping.

The AUSSIE KINDLING KRACKER™ draws on over 100 years of use in Australia and even more before that in Europe based on ones made by Waz’s grandfather here in Australia and his great grandfather prior in Switzerland in the 1800’s. It was originally a simple axe head and sometimes just a sharpened steel blade fixed vertically (facing upwards) supported by two vertical posts either side with supporting feet taking the impact load fixed to a log offcut at a comfortable height for the operator. Varying configurations of this common and age-old principle of spitting firewood and kindling (using a blunt downwards moving implement held in the hand vertically to strike and force firewood and kindling over a vertical upwards facing fixed spitting wedge or blade) have been used all around the world for centuries it’s nothing new. Many a novice putting their twist to this common principle of splitting firewood and kindling, just as Waz has done for over 50 years tinkering originally in his grandad’s sheds and workshops from the early age as a 4-year-old, then making various versions of them for personal and commercial use continuing to the present date.

The AUSSIE KINDLING KRACKER™ today is made from a combination of the finest 10mm & 6mm thick Australian BlueScope Xlerplate™ Tru-Spec™ HR 350 grade steel, it’s also a 100% Australian made product by Slot Me In™. It’s CNC precision laser cut, CNC precision milled and welded together for a lifetime of enjoyment and with an odd tickle of the blade occasionally with a file to keep a sharp edge it will keep you splitting your kindling safely and efficiently. The unique shaped steel blade “axe head” is firstly precision CNC laser cut from 10mm thick steel. It is then further processed with its cutting edge formed by a CNC milling machine to the final unique twin splitting angles and “V –shaped” design for the most efficient splitting of kindling. The additional 10 unique shaped fins or “wedges” are specifically designed and spaced to help further splitting of larger pieces of kindling. Being of an all-steel construction the AUSSIE KINDLING KRACKER™ won’t crack, shatter or chip if accidently hit by a hammer as cast iron commonly does, nor will it crack, shatter or chip if accidently dropped on concrete or hard surfaces again like cast iron commonly does. It’s also lighter and stronger than cast iron as well and is a tool that can be passed down from generation to generation as it will last the test of time and make the chore of splitting kindling a joy and one to look forward to, as we all know having the right tool for the job is the key to success.

A large upper throat opening of over 150mm in the upper hexagonal ring allows for large pieces of timber such as common sizes commercially used in the Australian building industry, eg 90mm x 90mm, 90mm x 45mm, 90mm x 35mm, 140mm x 45mm, 145mm x 35mm and more often discarded as offcuts and perfect for kindling. Of course, firewood in rounds naturally occurring up to 100mm in diameter can also be accommodated and split. Lengths of between 300mm to 350mm are ideal and it will spit Aussie hardwoods such as Redgum, Ironbark, Box Gums and many more too. Uneven grained and knotty wood and timber may require several strikes with the hammer with clear straight grained timbers splitting easily with one or two strikes.

It is advisable for the safest and most efficient use to secure your AUSSIE KINDLING KRACKER™ to a large suitable log offcut or milled piece of timber larger in surface area than the base of the AUSSIE KINDLING KRACKER™ at a comfortable and ergonomic height for the operator. Once you have selected your “base support” as to speak securely anchor it down by using 4 heavy gauge wood screws included through the 4 locating holes in the base ring and you’re ready to go.

In no time you will turn a chore into a joy having the right tool for the job and make kindling splitting fun and most importantly safe too. If you love and enjoy a fire like we do, then you’ll love your “Aussie Kindling Kracker™”. Available exclusively and direct from the manufacturer Slot Me In™, shipping Australia wide.

Shipping is calculated based on the total weight of the items in your cart. Please refer to the chart below to see the shipping rates to your state.

With this product your cart will weigh 6 kgs 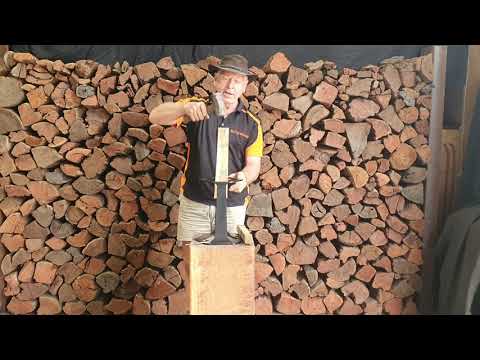